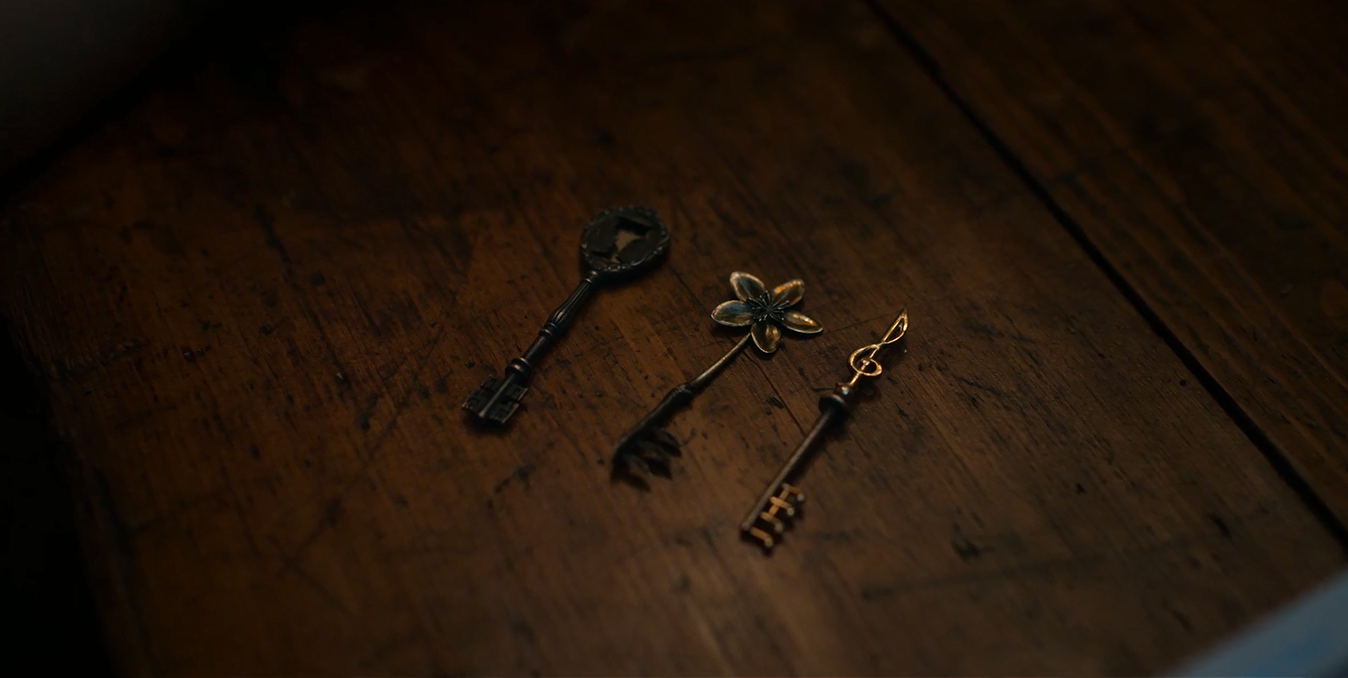 The matchstick key allows the user to start a fire in any location or thing by simply striking the key against it. This key does not require any door or lock.

The anywhere key allows the user to travel anywhere of their wish but there is a limitation of the key. In order to let the key work, it requires its destination to be a place, which the user can clearly visualize. For this reason, it doesn’t work when Kinsey Locke tried to go to the Eiffel tower because she never visited the location before.

This key opens a mirror portal where your reflection with a creepy smile beckons you into the mirror so it can trap you there in sort of prison of the self.

The Ghost key allows user to leave their physical body and exists solely as a spirit. during ghost form, the user can fly around and interact with other ghosts as well but is undetectable by the living human. The key has to be inserted into a specific door in the Keyhouse, which must remain open during the process,
otherwise, the user is trapped as a spirit.

By inserting the key in the magical music box, the wielder can take control of any person’s body by whispering that person’s name.

The Plant key allows the user to control any plant. In season 01, this key activated roots of a tree that has Duncan’s memories stored in magic jars below the ground. In season 02, Dodge uses this key to manipulate plants as a weapon. Nina uses this key to create a beautiful array of flowers for Duncan’s wedding in season 03.

The key has to be used with the mending cabinet itself. By putting any broken things inside the cabinet and locking the cabinet with the key, the broken things turn out as a whole again. But this does not work on dead people’s ashes as Nina fails to bring back his husband by putting the urn containing his ashes in the cabinet.

The identity key changes the user’s whole appearance by inserting it into their chin.

The Omega key opens a black door, a portal to another realm inside the Matheson sea caves.
It is the first key created by the Locke family to close the portal behind the black door.
Rendell and his friends opened the door using the key when they were teens, resulting in a glowing bullet containing demonic Dodge hitting Lucas.

The echo key can bring dead people back from the wellhouse but as a former shadow of themselves aka an Echo. Ellie uses the key to bring back his late childhood boyfriend Lucas, which really unleashes Dodge.
The echo also can not leave the wellhouse unless they have the anywhere key. If an echo crosses the wellhouse barrier, they immediately burn up.

The shadow key must be placed in the crown of shadows, which then allows the wearer to create shadow creatures. Any source of light can destroy the shadows.

The Hercules key is used to access the Hercules belt that gives superhuman strength to whoever wears it.

Small World key activates a dollhouse-the magical replica of the keyhouse. Whatever happens in the keyhouse can be seen in the dollhouse by inserting this key.

When children become adults they tend to forget the keys and the events related to keys. This key was created to help adults remember the magic of the keys.

It is used to unlock a lock that releases a cascade of chains that’s mostly to trap demons but can also trap humans.

The Demon key has the power to turn humans into demons. After multiple failed attempts at making this key, Gabe forces Duncan to forge the demon key.

It is the opposite of the demon key. it turns demons back into humans by splitting the demon from the human host.

Similar to the Hercules belt, this key is linked directly to a harness that unlocks a pair of fairy wings.

The key opens the animal door, a small door that leads outside from keyhouse.
when a person crawls through the door they transform into an animal and can communicate with other animals of the same species. Returning through the door reverses the effect and they return to their human form.

The timeshift key allows one to travel back in time and witness past events using the grandfather clock located in the keyhouse by spinning the roman numerical numbers inside the clock. However, altering events in the past does not change the future.

This key is used to lock and unlock the harlequin chest, a box to store anything. the chest is impenetrable and indestructible, making it the perfect place to hide all keys from potential thieves.

You may also like: The Reason Behind the Popularity of Charlie Cox’s Daredevil

1 thought on “Complete List of All keys seen in Netflix’s Locke and Key Series.”